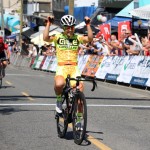 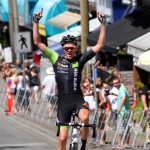 White Rock, BC – With temperatures hovering near 30 degrees, the 36th annual Peace Arch News Road Race proved to be as gruel​l​ing as ever for the more than 100 riders who took to the streets of White Rock for one of North America’s most historic and prestigious races.

With two laps to go, Vancouver’s Garrett McLeod, who’s originally from Wolfville, Nova Scotia, and his H&R Block Pro Cycling teammate Adam de Vos of Victoria each took turns attacking and it was McLeod coming away ahead of the rest of the field. Even then though, he wasn’t sure he’d be able to maintain the lead – but he did, and won the race after finishing third a year ago.

“I wasn’t super confident that I was going to stay away, but I knew if I came back, then Adam was gone, so it was perfect for the team,” he explained. “The team rode great today, and Adam is riding amazing, so I knew we just had to be aggressive and be the ones initiating the moves and getting away.”

Cycling veteran Francisco Mancebo, the man they call ‘Paco’, sprinted ahead of de Vos to place second in a photo finish. The 39-year-old Spaniard, who was third at the 2005 Tour de France and sixth in the 2004 Tour de France, was well aware that he didn’t have any teammates in the chase behind McLeod.

“It was eight riders – two from H&R Block and two from Silber. The H&R guys attacked one time, then another time, and finally Garrett went alone and I stayed behind,” said the three time USA Cycling National Racing Calendar champion. “With second place, I’m really happy.”

In the chase with two to go, de Vos was happy to let Mancebo do most of the work, but definitely felt the push from the other teams and riders.

“Paco was doing a lot of work and Silber had a few guys in there so they had the onus to do a lot of work, and Will Routley, he was the only guy for Optum in there, but certainly did his turns and cooked himself a bit. I know he doesn’t like racing for second, so it was a good ride by him as well,” he added.

The fact that the Peace Arch News Road Race combines 130 kilometres of long steep climbs, sharp turns and quick descents – and is the final of eight races in nine days as part of BC Superweek – definitely took a toll on the riders.
“It’s a bit tough because it comes right at the end of the week, everyone’s a bit cooked and we knew Silber had a lot of strong guys so we wanted to make sure we weren’t pushing the pace in the front group if we were too outnumbered. I think once we got that group established, we had good numbers for us and Silber had good numbers, so it rolled pretty well and then at the end, Garrett and I were both feeling really strong. We were taking turns attacking and eventually Garrett got away after I got brought back on one, and it was an easy ride for me to the finish,” said de Vos. “White Rock Road Race is definitely one of my favourite races on the calendar and consistently it’s the most challenging race I do all year, so I can’t wait for next year. We’re going to repeat next year, that’s the plan.”

After a
​second​ place finish at the MK Delta Lands Criterium eight days ago and at the Global Relay Gastown Grand Prix on Wednesday, McLeod doesn’t hesitate in calling BC Superweek a success for himself and the H&R Block Pro Cycling Team.

“It’s nice to finally get a win!” he smiled after completing the road race in three hours, 28 minutes, and 35 seconds.

Shelley Olds came to Metro Vancouver to ride BC Superweek as training and preparation for La Course by Le Tour de France next week in Paris, but somewhere along the way, the motivation became even more than that. As the 34-year-old rode without any teammates, cleaned up prime after prime, and found herself on the podium at race after race, the motivation also became the chance to make history at Canada’s biggest professional road cycling series.

And make history she did as the Team Ale-Cipollini rider completed one of the most dominating performances ever at BC Superweek with a win in the 36th edition of Sunday’s Peace Arch News Road Race as part of the Beverley by Cressey Tour de White Rock. Olds and Vancouver’s Sara Bergen, who is riding for Trek Red Truck p/b Mosaic Homes, broke away from the pack with three laps to go and built a 90 second gap.

Bergen actually broke away earlier and it was part of her game plan to push Olds as much as she could, especially with a handful of her Trek Red Truck teammates in the chase.

“It’s great knowing you have three or four strong teammates behind you. It gives you the strength to make those moves and take those chances. With Shelley in the field and riding so strongly, we definitely had to make some moves to make it hard (on her),” explained Bergen, who tried to shake Olds on the last lap. “”I pretty much took the hills as hard as I could and Shelley’s a strong lady so that didn’t go too well for me. And then I actually got a flat tire along the straightaway leading to the finish line, but still, she’s a strong sprinter and I did what I could.”

“The tactic was to cover the girls I know have been strong all week and the teams that obviously had four to five riders. I just can’t let anything go because I’m alone so I have to try to cover everything,” she said. “Sometimes the best defense is a good offense, so when I saw there was one rider off the front and there wasn’t a big interest to chase, I decided it was time to go – it’s now or never, so I jumped across.”

Now Olds turns her attention to La Course by Le Tour de France – and she enters the race on a major roll – with an eye on a podium finish on the Champs-Élysées.

“It’s a huge goal of mine, if I get onto the podium there, it’s because of all the training I’ve gotten here, the good competition, and the motivation from the crowds to race hard and aggressive.”

Regardless of how she performs in Paris, Shelley Olds endeared herself to cycling fans in British Columbia with a performance for the ages. Even she admits she’ll miss the races of BC Superweek.

“I wish I didn’t have to go! I want to stay and race some more and hang out and see these beautiful towns, it’s been awesome,” she added.

In third was Montreal’s Lex Albrecht, who races for Optum p/b Kelly Benefit Strategies. She was second in the Peace Arch News Road Race in 2013, en route to claiming the Tour de White Rock omnium that year.